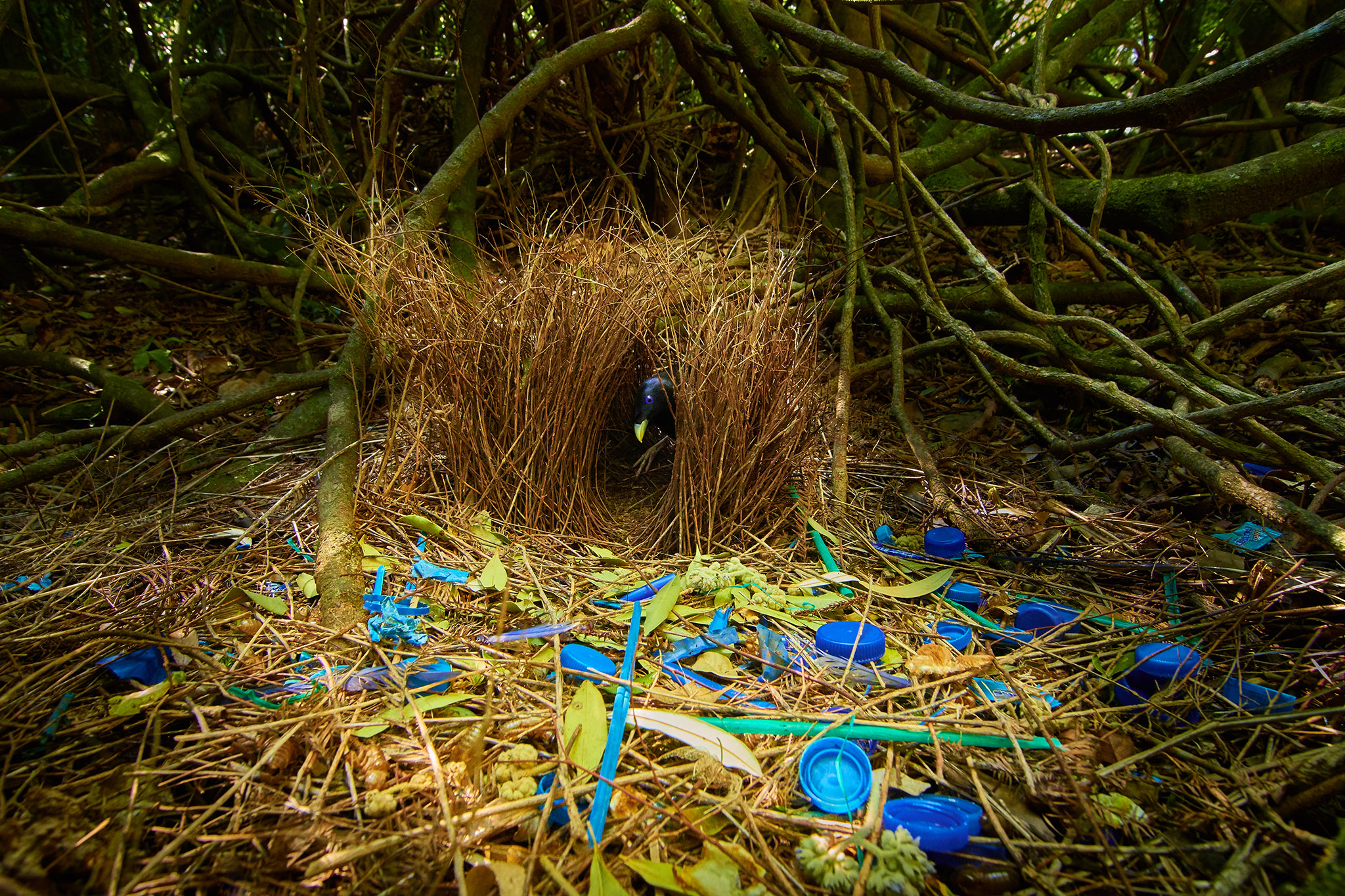 Kangaroos with babies in a pouch, cute koalas eating eucalyptus leaves, and the world’s most venomous snakes… All of these things come to mind when you say Australia. But have you ever heard of bowerbirds? We’ll take a closer look at two of them in today’s edition of “Behind the Photos.”

If you’ve ever seen any of the BBC series about Australia, maybe you’ve been as captivated as I was by the incredibly complex courtship behavior of birds that belong to the family Ptilonorhynchidae, the Bowerbirds. This small, twenty-seven species group of birds lives only in Australia and Papua New Guinea.

Female Bowerbirds are very particular when it comes to choosing a partner. (Although, with the exception of Catbirds (Ailuroedus), they don’t form monogamous pairs.) What fascinated Charles Darwin himself about the Bowerbird many years ago? It was the ritualized, generations-old way in which males court their mates.

The male Bowerbirds – unlike their better-known cousins the Birds-of-Paradise – do not stand out with sophisticated colors or surprising shapes. They’re really on the plain side. So, how do males manage to persuade the picky females anyway? By their architectural and design skills.

Birds are remarkably intelligent creatures for their size. Over the course of time, they have evolved some interesting behavioral patterns. Male bowerbirds seduce females with their songs, and especially their sophisticated shelters. (Hence the name bowerbird, named after the bowers they build.)

The bowers that they build often consist of thousands of tiny twigs. Males devote a great deal of effort to building and refining them. Some Papuan species such as the genus Amblyornis create constructions so elaborate that they fooled the first explorers of the Papuan inland. They look more like the work of people than any animal.

The birds are obsessed with decoration. The greater the artistic impression they make on the female, the greater their chance of mating. Below-average architecture and unconvincing vocal performance can condemn a male to many years of celibacy.

To decorate their bowers, males use a variety of artifacts. Petals of just-blooming plants, berries, beetle scabs, snail shells, pebbles. The colors must not only be striking but also in line with the bird’s specific taste. Again, a lot like people!

Speaking of people, our garbage is part of what the bowerbird uses for its decoration. Human presence introduces all sorts of plastic rubbish – bottle caps, gum wrappers, drink straws, and so on.

As depressing as that may be, notice the strange color-matching of all the junk that Bowerbird has deposited in the following photo. And also notice the color of his iris. Remarkable, don’t you think?

The Satin Bowerbird I captured in my photo is one of the most common members of the family. I came across its bower barely a few dozen meters from the parking lot, near a trail in Lamington National Park.

This played into my hands in the execution of my plan. I needed an individual that was fairly accustomed to human presence, which in this case was to be expected. The aim was to take a photograph at a very wide angle. If I used a standard focal length, say 500mm, I would completely suppress the surrounding environment.

In order not to disturb the bird too much, I prepared everything I needed in advance. To avoid scaring the bird, I set up my composition and used the SnapBridge app to trigger my camera from a distance. Fortunately, the bowerbird flew in almost immediately. As soon as his head poked out, I activated the trigger. Click! And there it was!

My second photo captures the Great Bowerbird, the largest member of the family. Here I was dealing with exactly the opposite problem to the Satin Bowerbird. I wanted to suppress, if possible, the environment that this bird had chosen for its bower. The ten-meter strip of grass and shrubs that stretched between the road and the railroad tracks was not particularly aesthetically pleasing. So, I used a 70-200mm lens and zoomed into 170mm.

Amongst the rubbish, in the gloom of an overhanging branch, stood the Bowerbird. It was around noon, a time when it almost makes no sense to take the camera out of the backpack. Deep shadows under the tree and an overlit background. A difficult situation to deal with.

Luckily, I had a flash with me with a fairly large softbox. I took it to Australia for exactly these situations. The diffused flash helped balance the highlights and shadows and gave the photo a nice soft light. (Nicholas’s recent article about flash for wildlife photography is pretty relevant if you want to know the right technique!)

So, that was two Bowerbirds. Closely related, but still unique. As was my approach to photographing them. When the situation allows, it’s good to think about how to capture the shot so that the photo tells a story. And as I see it, photographs absolutely should tell stories.