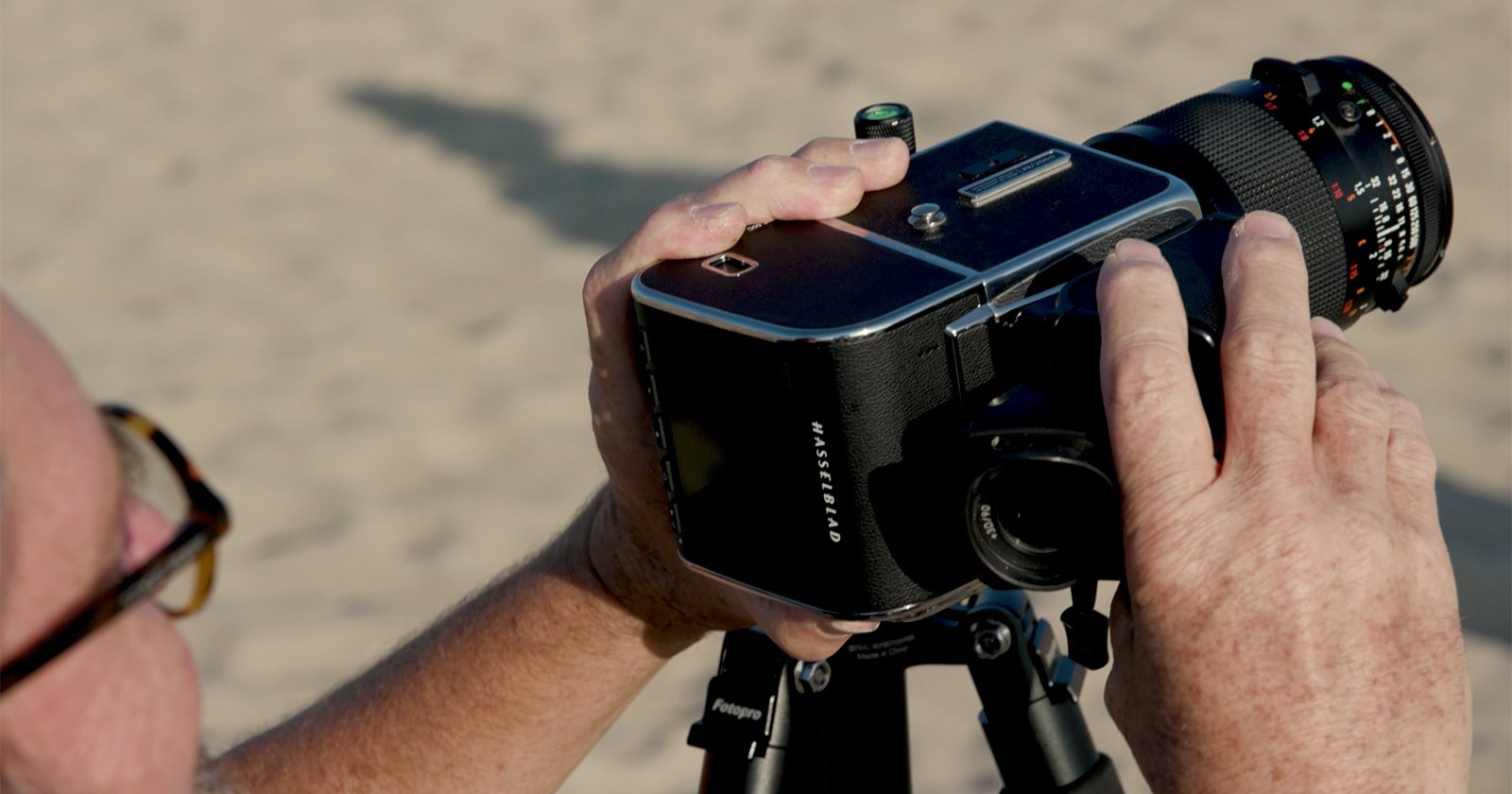 I have been so excited about this Hasselblad 907X camera. In this hands on review of the Hasselblad 907x and CFV II 50C we show you an image quality test, discuss the ergonomics and try it out on our Hasselblad 500cm with some vintage lenses. Check it out to see what we got!

In this video and review, we take a look at a very exciting camera. Those of you who love Hasselblad as I do—I have the Hasselblad 500CM and also an EL/M—have probably been super excited about having an affordable back you can put on one of your vintage systems and turn it into a digital camera.

That’s exactly what we have here. 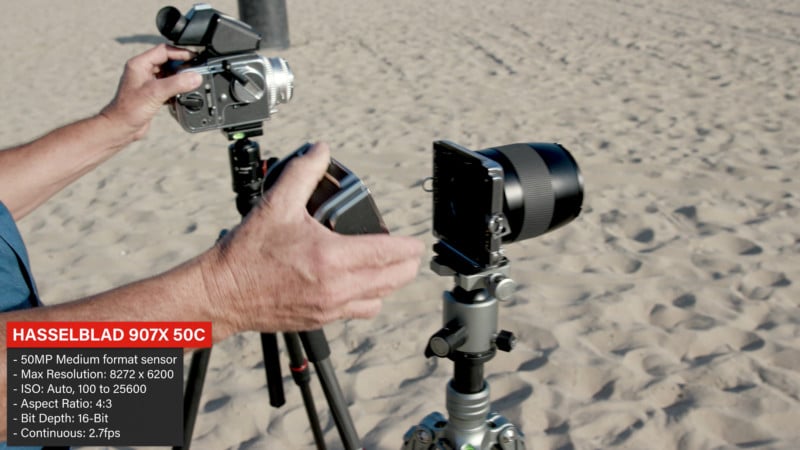 We have the 907X and the CFV II 50 C. This is Hasselblad’s new camera, and it’s basically a lens mount that you can attach the CFV digital back onto. But the cool thing is, you can also take this back and replace the film back that’s on the old 500 series cameras. It’s awesome.

Ever since this was announced one or two years ago, I’ve been dying to get my hands on it. Finally, it’s available.

You can pick these things up for about $6,400. So it’s not cheap (affordable is a relative term here) but I am really excited to try this out. I love the form factor, and it’s honestly different than any other camera we’ve shot with. It’ll be fun to try this with the new XCD digital, show what it can do with a brand new sharp lens, and then try it with the old vintage camera and lenses as well.

We’re going to shoot the pier here, and see exactly what we got. 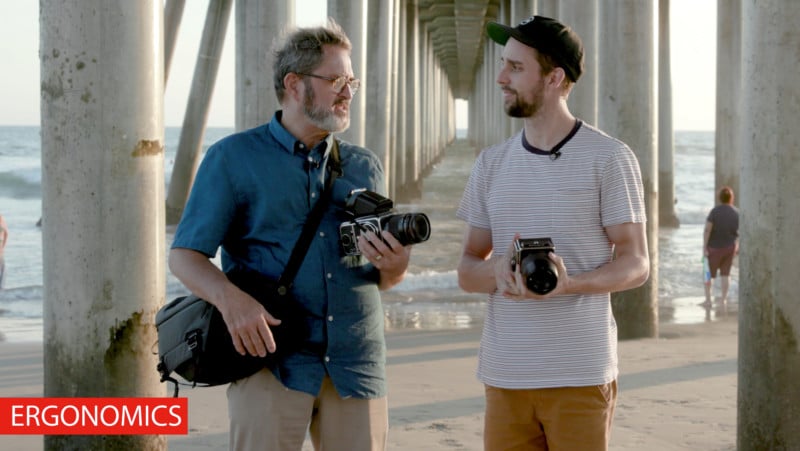 Let’s talk about ergonomics. This is a funny one, because it’s basically a little box. It is the most interesting camera I think I’ve ever used, and I actually really like it. My one complaint is that it would be nice to have a handle on it, which is probably why they also released an extension grip that you can buy for like $700.

If I owned this camera, I would probably get that. But it’s definitely usable even without it.

As is, the 907x 50c is kind of discreet, which is what I like about it. You can just pop the screen out and shoot from down low using the LCD as your viewfinder. I was worried about shooting on the beach in the bright sun, and it was a tiny bit challenging, but not nearly as bad as some other cameras that you’ll shoot with. 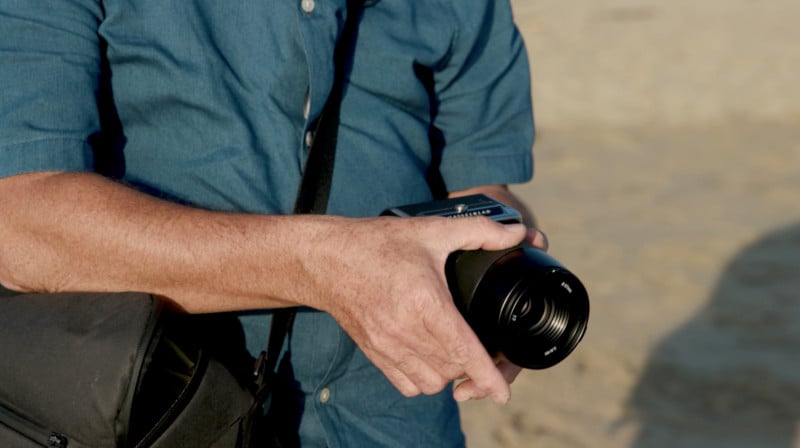 It’s pretty bright. It’s pretty clear. And I kind of like how you can just hold the camera discreetly at waist level and shoot it like a twin reflex.

It’s also really small. Essentially the only controls on the camera are the shutter release and one single dial—a small little collar around the shutter release. That changes your aperture, or if you’re on shutter priority, it’ll change your shutter.

It’s the only dial on the camera, which is pretty awesome. Very minimalist. 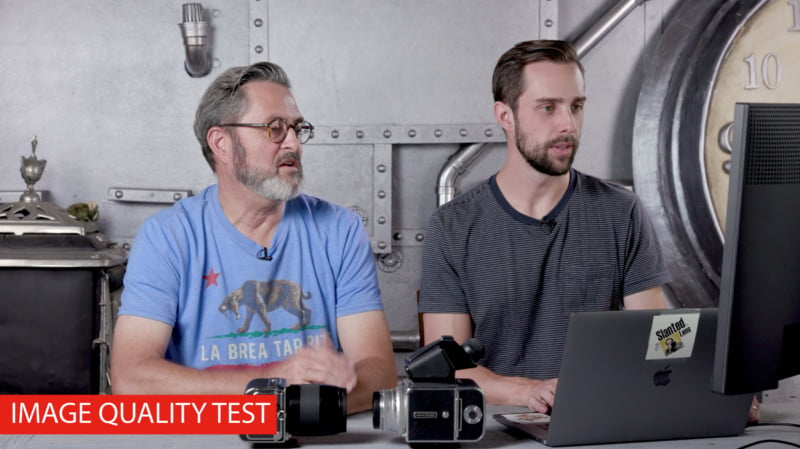 Alright, so let’s look at our picture quality. This first image is one of the first images we took at the beach. We had the camera set up and then we switched the digital back, back and forth, between the CFV II 50C and the 500CM. 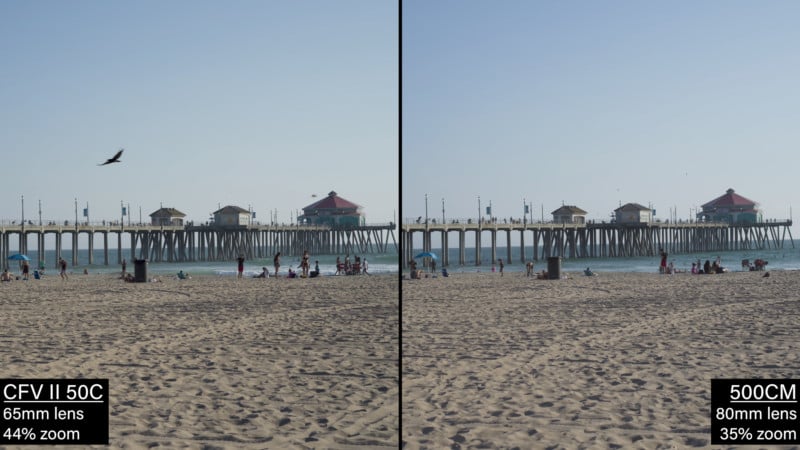 The framing is a little different because the 80mm is tighter than the 65mm. When we zoom in here to Ruby’s café they are pretty close. It feels a little like there’s a little less contrast and sharpness in the 500CM but it’s pretty dang close. And you do have a little bit more chromatic aberration that you’d expect that from a 40-year-old lens over a brand new one.

One thing I love about this camera is the deep but subtle color tonality. It’s really subtle and beautiful. It renders the blues into the warmth so incredibly well. So smooth. And there’s no abruptness about it and it catches all the subtle different hues and the different luminance values. This is one of the things I like about the sensor and the way that Hasselblad is. 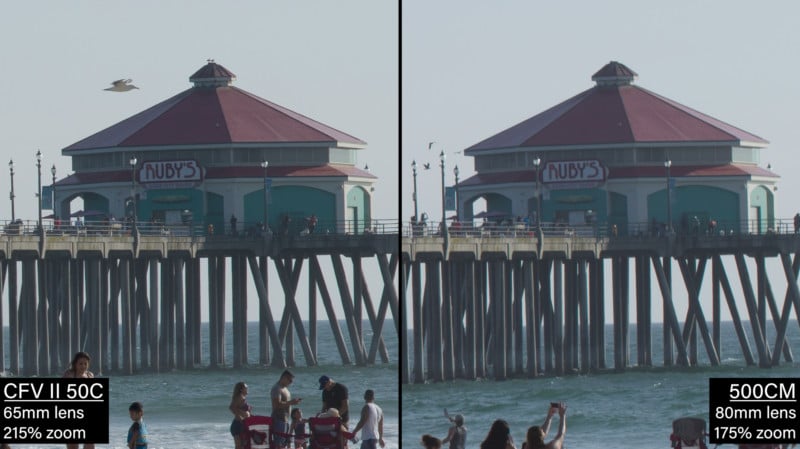 If you look at the Ruby’s sign, it’s just a really beautiful, deep red. It’s not blowing out and it’s not turning a really weird color. It’s just red, like it should be, like it is with your eyes. 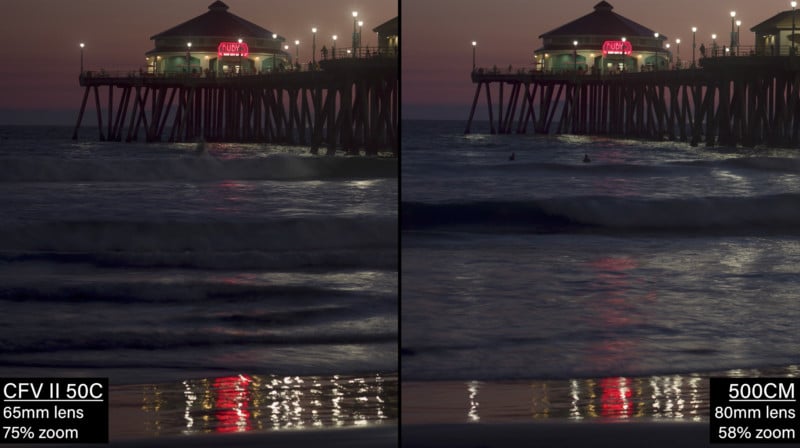 Look at the reflection down here. That is a really nice rendition. What’s interesting here is the star flare you get with the XCD lenses. It’s kind of fun, but you really don’t get any flare with the vintage lens which is surprising. Then I went to 16 second exposures. 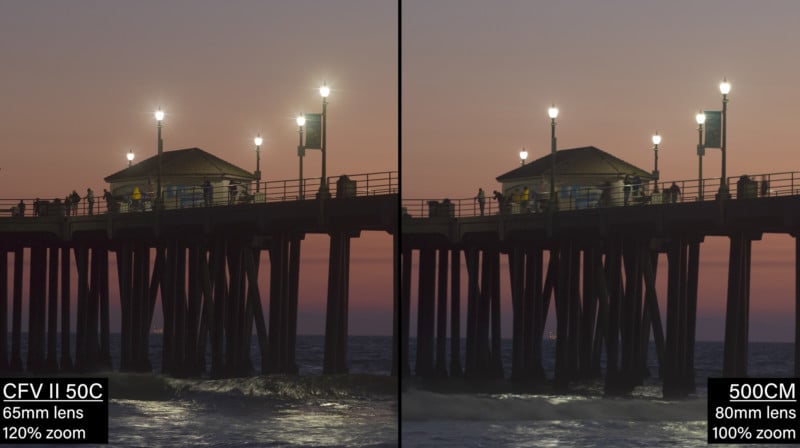 There’s a general softness to them. That must have something to do with the vapor in the air. 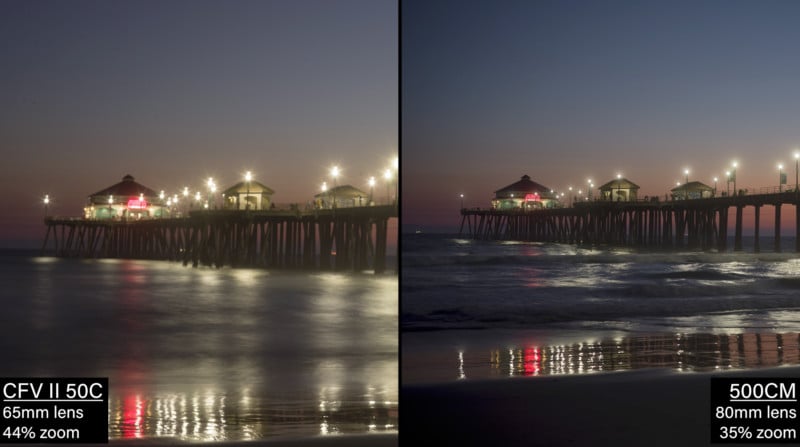 It got really moist as the sun went down and the old Hasselblad just got covered with water, the body and the lens. I had to clean the lens constantly and I didn’t have a cable release. That might have contributed to that as well. But that’s the hard part about the old Hasselblad, you have to go to bulb. So once you hit it you have to count out your exposure with a stopwatch. It’s older technology. 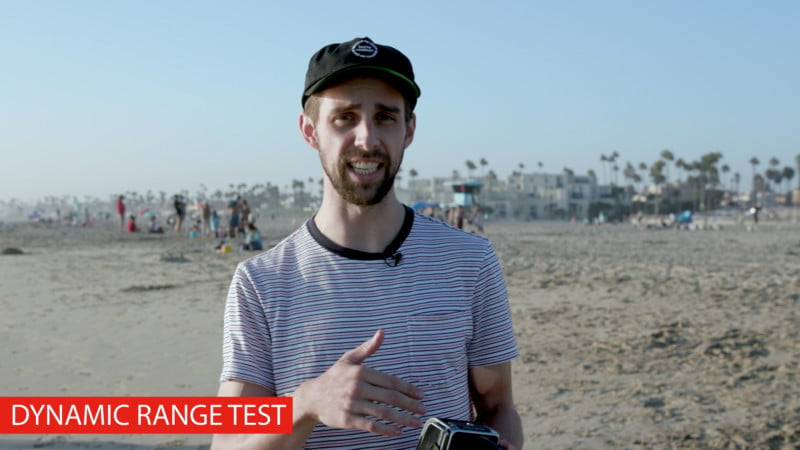 From our past tests that we’ve done with the X1D, we know that you can under expose this camera by two or three stops and bring those shadows up in post and it will be just fine. That’s really the 14 stop dynamic range at play.

These next shots are meant to show you the dynamic range of this camera. It’s got a nicely exposed highlight, but the shadows are getting pretty deep. 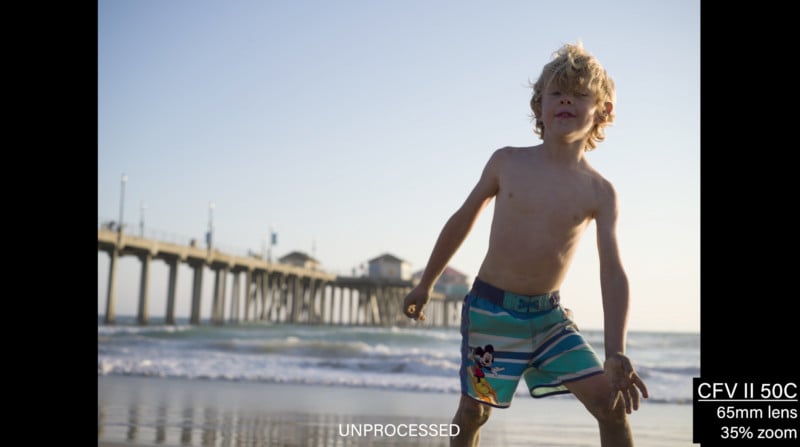 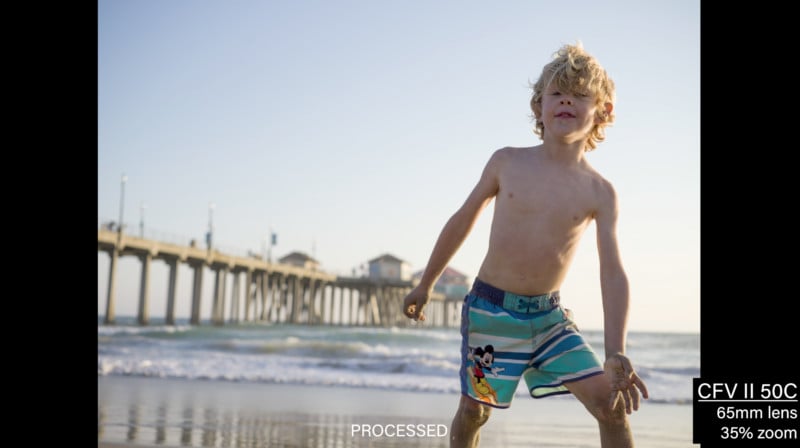 But when you take it into Camera Raw, it had no problem bringing the shadows back up. It took 3 seconds. You could do a million things with this. And this could be even underexposed another stop and a half easily. 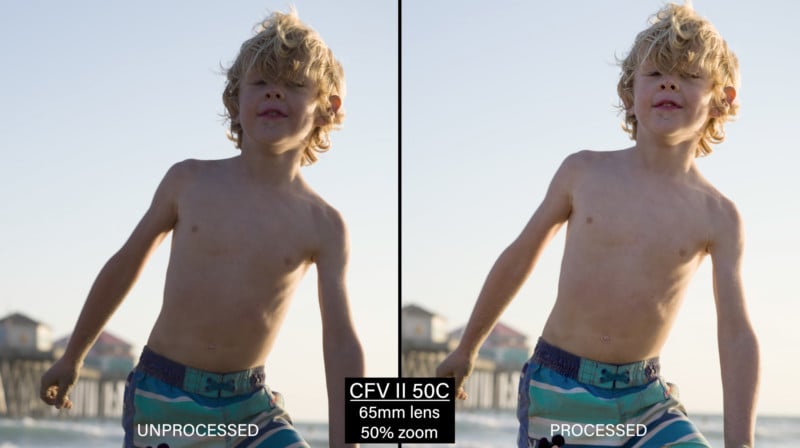 And look at the color rendition in that pink blanket, and the subtle warmth in his face. It just feels like you’re getting a true color with this. A deep rendition of the color spectrum that’s actually there. 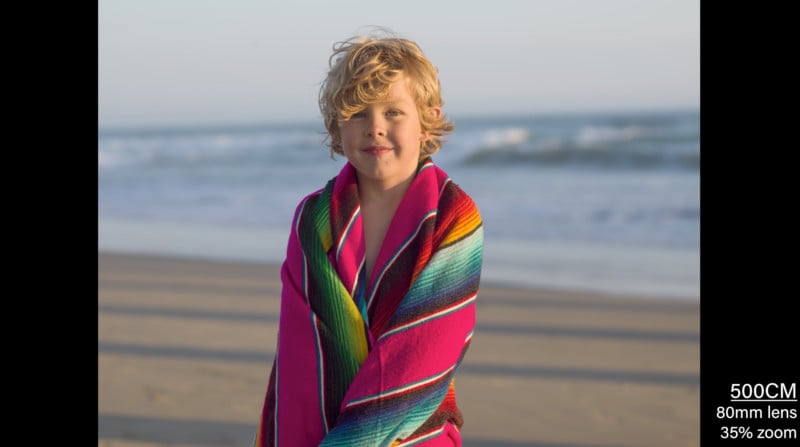 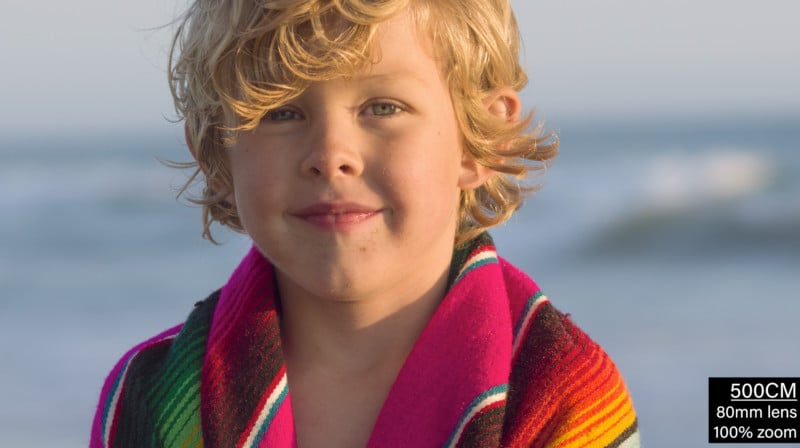 It is interesting shooting it with a vintage camera. Here are of some of the challenges.

You certainly have to look through the eyepiece to frame the framing. It is difficult. If I used this regularly I would definitely have tape off my viewfinder so I could know exactly what is “live” with the digital back on the 500CM, because the sensor is smaller than the film you would normally use with this camera, so it crops in.

I’ll be in tight thinking I’ve got a great shot. And the reality is, it’s cropping a lot of it out. That’s a challenge.

Also, as I’m looking through the viewfinder and shooting, it’s interesting to me because I keep looking at the LCD—I shoot and I look and I shoot and I look. And that process is great. But I keep thinking that I want to see it in the viewfinder… but of course I can’t because it’s not electronic. So I’m missing that. 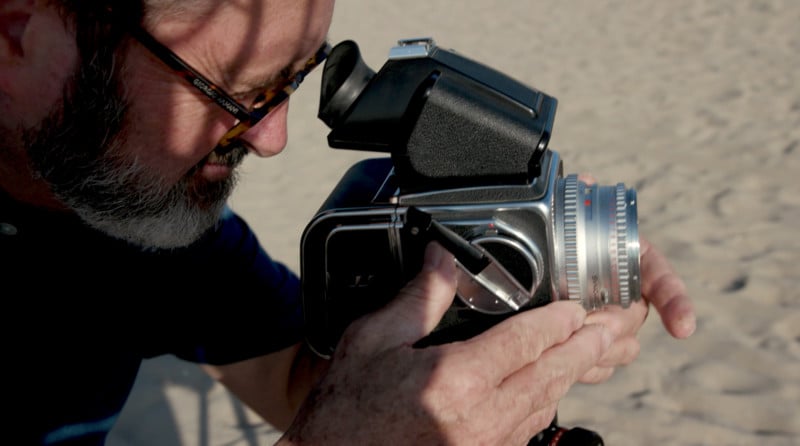 Next, we’re going to look at some shots we did with all the different lenses. I have three lenses. There’s a 40mm, an 80mm and a 120mm, and we also used the 65mm that came with the 907X. We wanted to look at the different styles and how those lenses resolve. Do they resolve as well as new style lenses? It’ll be interesting to see. I’m very curious.

These Hasselblad lenses are legendary, they’re beautiful, but they were designed for film and film is generally softer. Though, if you get into the medium format world there is a LOT of resolution to play with. So it’ll be interesting to look at how those two things balance out. 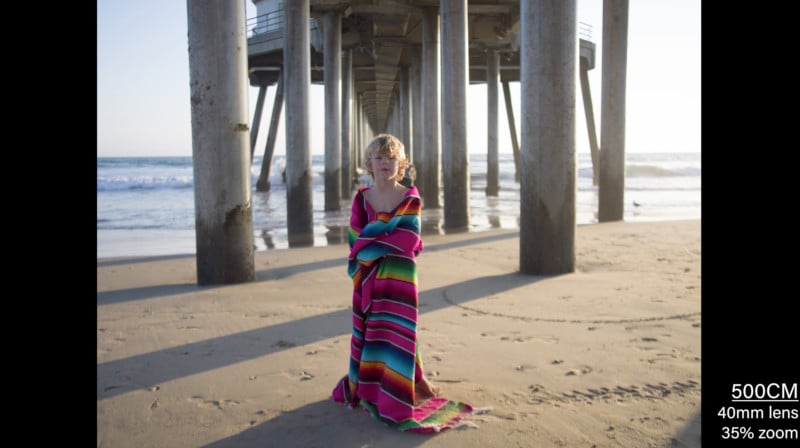 This is a 40mm. It’s worth noting that I dropped this lens and send it into Hasselblad for repairs at one point. And when I say I dropped it, it wasn’t like it dropped a couple feet. It dropped 20 feet out of a crow’s nest for shooting straight down onto the concrete floor. It was on the 500CM camera at the time, so it messed up my camera a little bit, but Hasselblad fixed it.

There are some weird things going on with the out of focus areas. It just feels really smudgy to me. But it’s kind of fun. It’s a nice lens. Not a lot of edge sharpness. 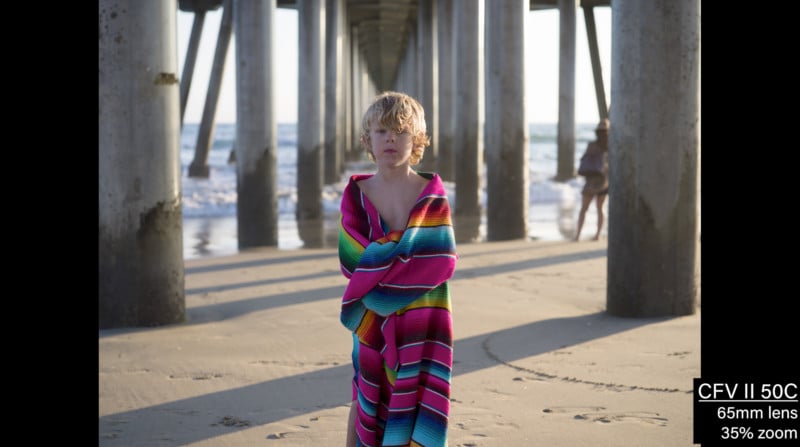 Here we have the 65mm. So this is the most modern lens of the bunch and you can tell immediately, even without zooming in or anything. The contrast is a little stronger and the edges are sharper.

And then when you do zoom in, it’s just a very crisp lens. We don’t have the chromatic aberration on it. Look at those pillars in the background with the bright lights on them: 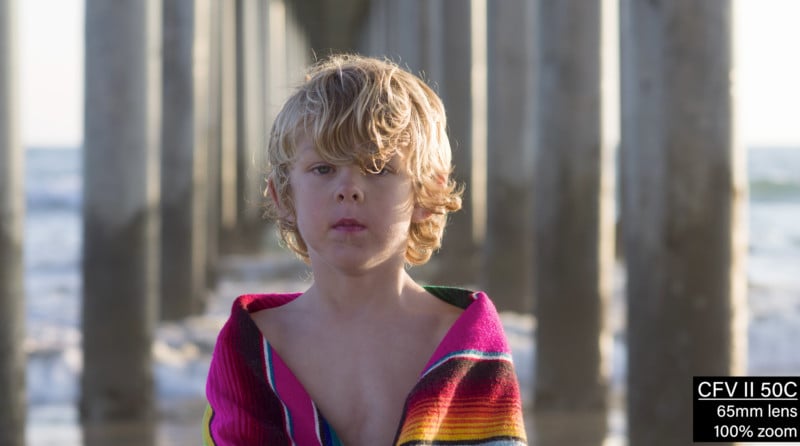 If you look at the next one, you can see a difference in that that older lens (the 80mm). You see that halo along those highlight edges. And the contrast is a little lifted: 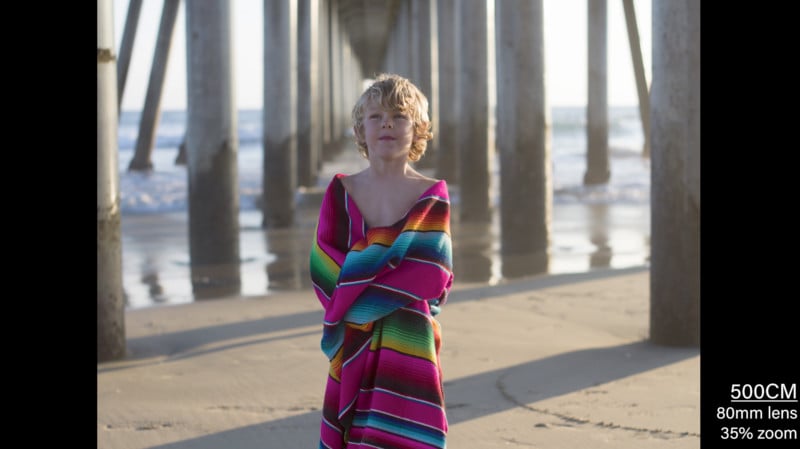 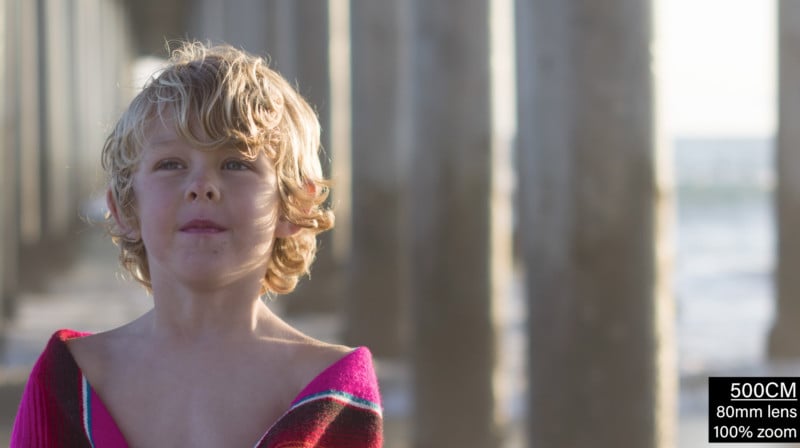 What is kind of amazing if you go back and forth between these two though, is that the overall color is pretty much the same. That lens is doing its job, even though they are old lenses. 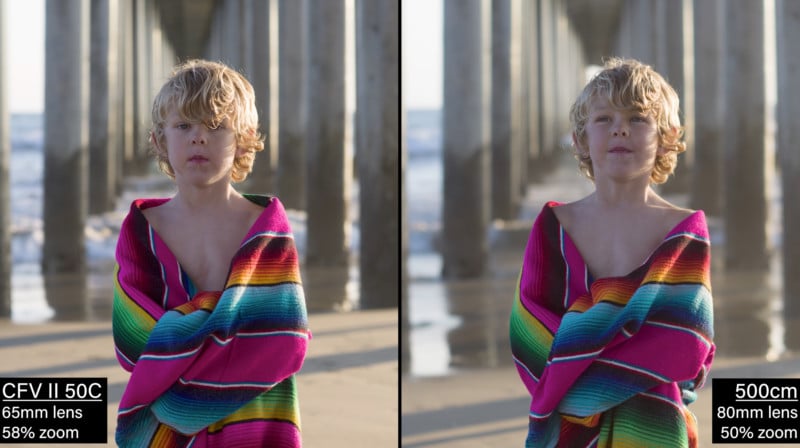 And now here’s a quick look at the 120mm. I love this picture. And it is sharper. You can see it in the background and then you can really see it in his further eye if you zoom in to 100%. 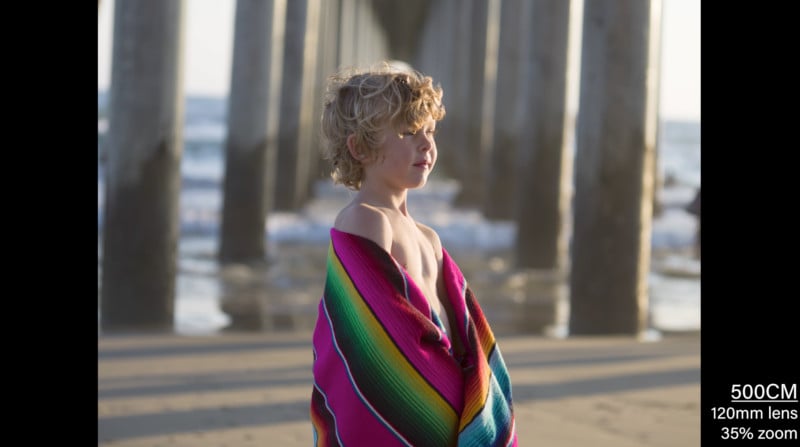 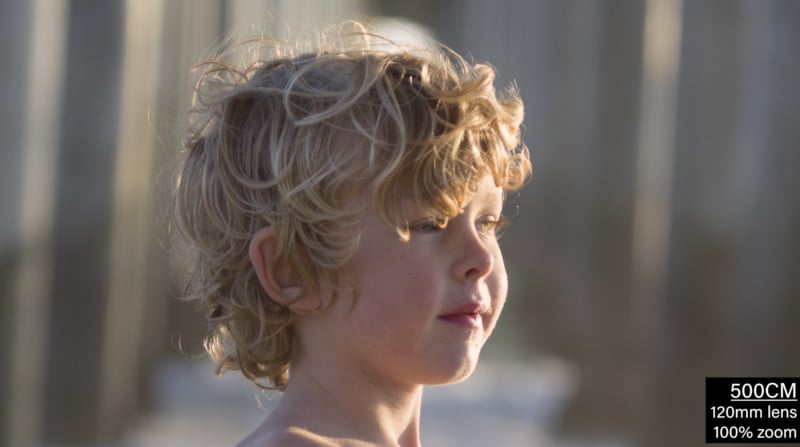 Finally, we’ve talked a lot about shooting with the vintage lenses, but we also wanted to look at comparisons that show the results you can get with the new lens. So here’s a couple of images that we’re looking at from the new lens—some auto focused, and some manual focused: 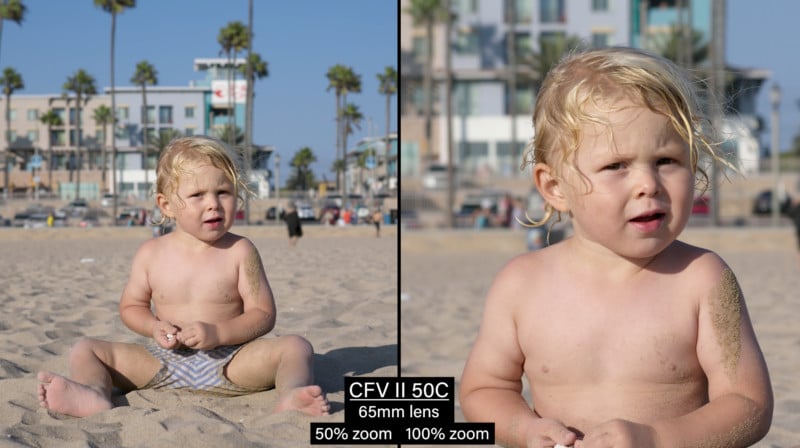 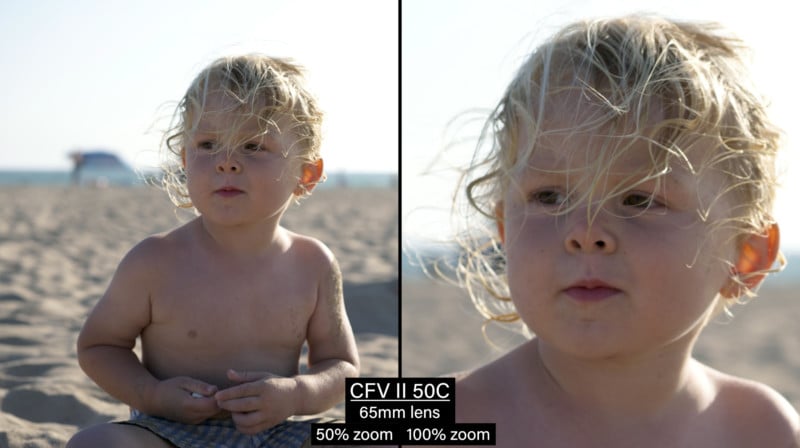 My sense about this is this is an incredible offering, and people who have been in photography for a long time are going to buy this. They’re going to be using it on their old systems that they are shooting film with already. I also think some wedding photographers will start shooting on this just because it looks cool.

I think it’s the most affordable camera back we’ve ever had for medium format, and that is an incredible step. I think with this and the X1D, as a natural light shooter, you simply can’t beat the dynamic range. It gives you open shadows that you can work with and even holds the highlights. I just think it gives you a lot of options there.

On the down side, it is a little bit slow and a little bit more deliberate than using the camera where you’re looking for the viewfinder and you’re shooting away.

So, ultimately, a great offering from Hasselblad. I’m just so excited that they’re coming out with great products and the market is responding to them. I think the 907x system is a very interesting and innovative idea. I’m glad they did it. And I would love to see other camera companies do interesting stuff like this.

About the author: Jay P. Morgan is a commercial photographer with over two decades of experience in the industry. He teaches photography through his company, The Slanted Lens, which runs a popular YouTube channel. This article was also published here.