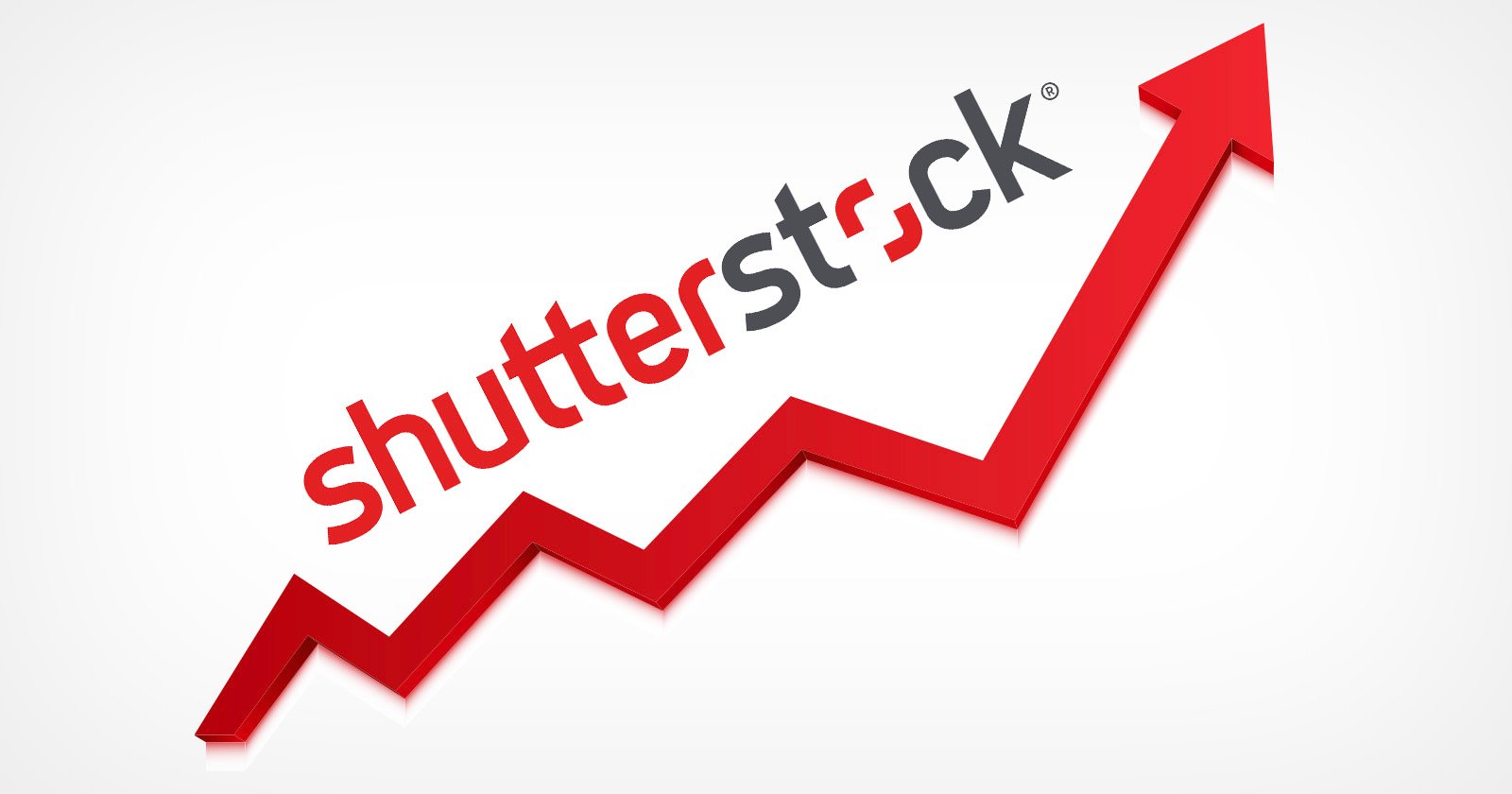 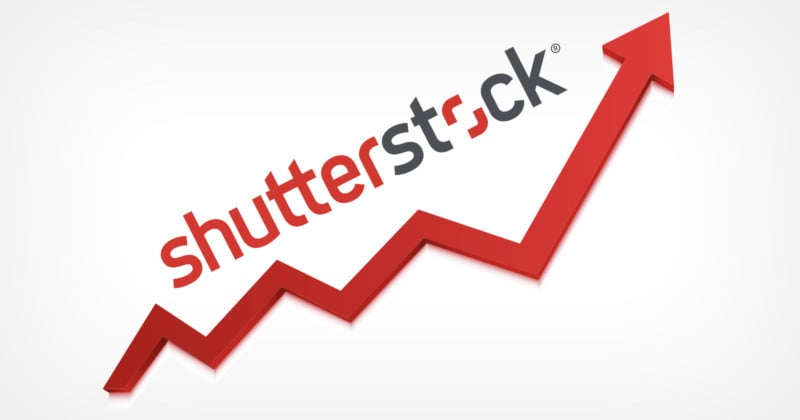 In this research, we at Xpiks analyzed a total of 14,000 portfolios that own the first 100 results in top-500 queries on Shutterstock in order to understand what should you do to be successful on the platform.

Shutterstock is one of the top-tier microstock websites alongside Adobe Stock and Getty Images. It was founded in 2003 and since then has gained more than 200 million images and more than 10 million videos. It is a go-to place for many customers and businesses. Also, the entry-level to sell there is relatively low (you need to pass an exam with one image out of 10) so it also counts millions of contributors who compete for ranking of their images and portfolios.

The idea to do this research came naturally after we analyzed top-100 customer queries by traffic. The most frequent question people asked on forums was about the portfolios of the accounts that actually rank for these queries. So this is what we did:

We gathered actual search results and checked the portfolios that owned them. To make it even more profound, we decided to use top-500 queries instead of top-100. This will give a better picture of who those users are and what have they done to rank there.

We only took into account photography and illustration search results, excluding video. All in all, there were 500 queries and 100 results for each of them (the first page of results), with 50,000 images in total to analyze. These images belong to 14,046 portfolios, which means that these users own multiple results on the first page of search.

Shutterstock Contributors: Who Are They

There’re many ways to slice and dice authors, but there’s one distinction that we think is most important: individuals vs studios. It is clear that studios might have an advantage over the individuals because there’re few people who work as a team and they can simply produce more content. This category includes small studios with only two to three people and also big studios like KrakenImages. With a rough estimate, we found that the percentage of studios is only 4% of user accounts. It is an underestimation because a few personal accounts have grown into small studios, but the actual number is only marginally bigger than this estimate. 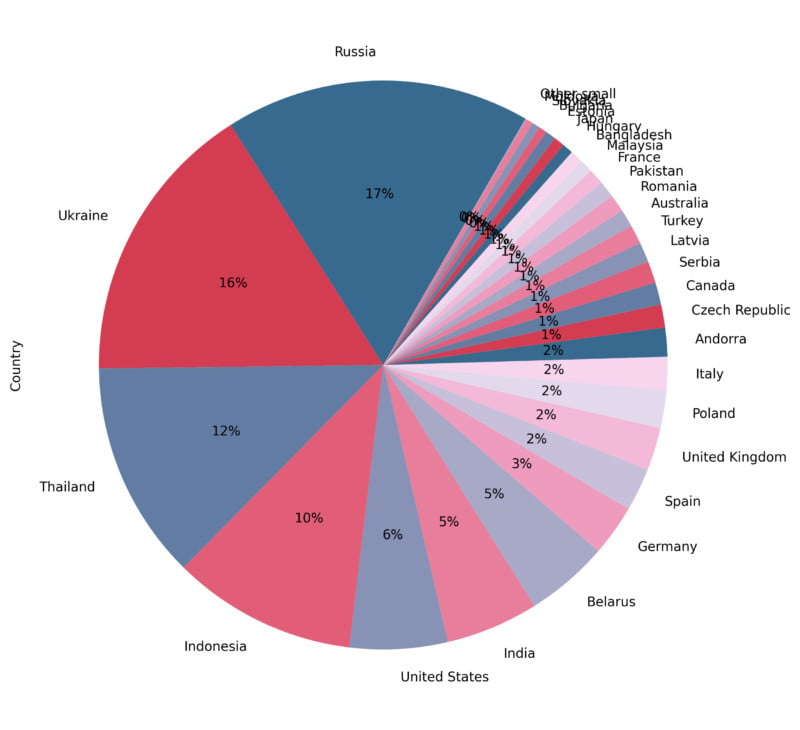 As for the self-declared country, we found that the majority of the contributors in our list come from only four countries: Russia, Ukraine, Thailand, and Indonesia.

There can be few reasons for such distribution.

The most obvious might be that earnings from microstock probably end up as more than average salary in those countries. However, it also might be that there are many creative individuals there who cannot find another way of earning by their craft due to lack of relevant positions. It is surprising though, that United States, Germany, Spain, and the UK are next, given the high levels of taxes and high expenses needed to maintain a similar quality of life. Apparently, Shutterstock can still provide enough income, even despite the recent earnings cut.

It might be tempting to think that people who rank in top-500 queries might have portfolios of enormous size. In fact, there are many huge portfolios over there. Here are the top-10:

You can see that there are five accounts with a whopping over a million images and, actually, there are 155 accounts with more than 100,000 images. However, these are the minority of the 14,046 accounts and the actual distribution of accounts by the number of images looks a bit more optimistic: 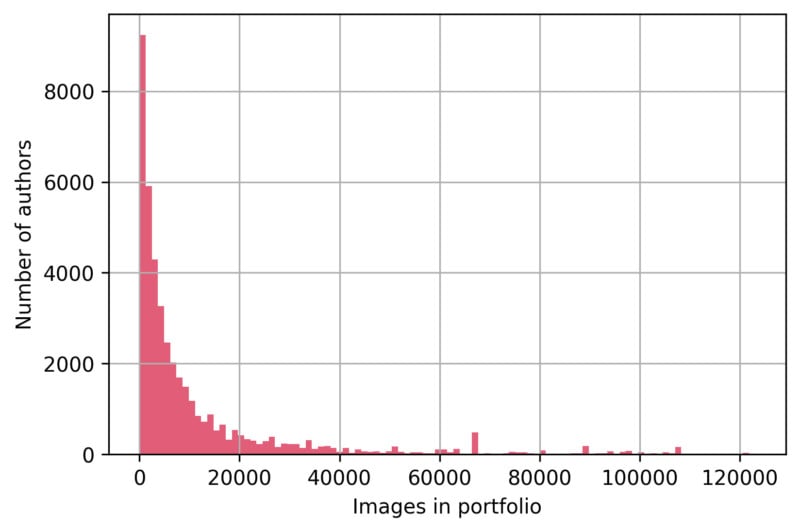 The vast majority of accounts that rank in the top-500 customer queries have less than 20,000 images. In fact, around 30% of them have less than 1,000 images. This is good news because it indicates that you don’t need to have hundreds of thousands of images to rank high. In fact, there are accounts with as little as around a hundred images that rank in top-100 (not 500) customer queries. It does not mean the competition is easy, but it means there is a good amount of hope for newcomers, even now.

Now that you know the number of images in the portfolios, it’s good to see how they are created. Here are the most used styles used: 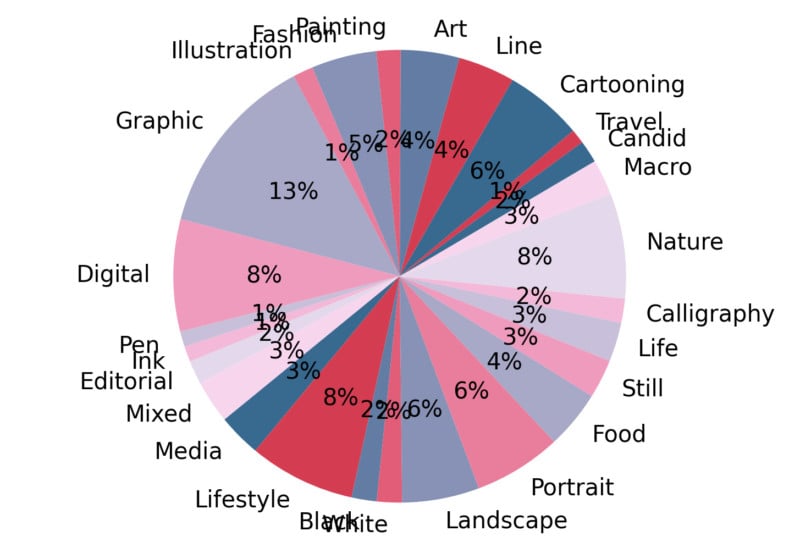 It is surprising how uneven is the distribution here. Even though lifestyle, portrait, life, and fashion photography account for 18% of the content together, they are almost matched by graphic design with 13% and landscape, travel, and nature photography with 15%. But all of them are heavily outnumbered by various styles in illustrations like cartooning, calligraphy, line, art, and painting content.

As for the how, here are the most used tools: 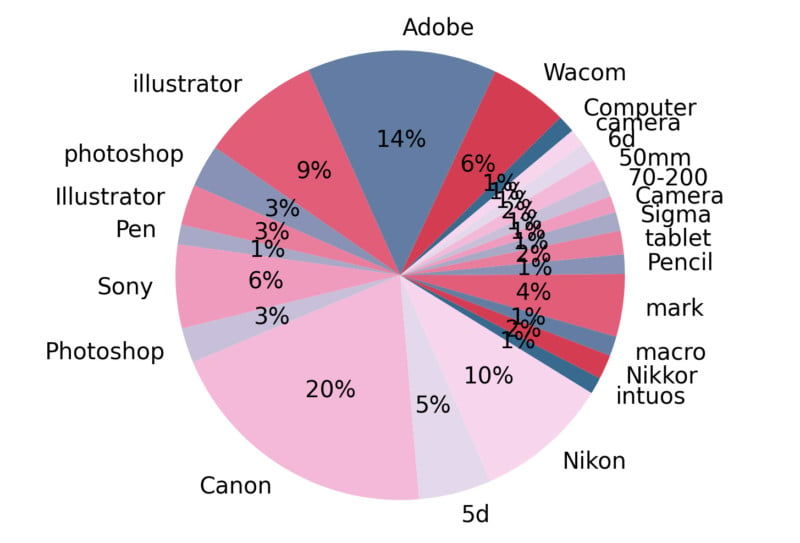 And before you even start with the Canon versus Nikon fight here, note that Adobe is also quite high. It is somewhat a shame that other products like Inkscape or Affinity did not score highly here. It is interesting that even though tablets and software like ProCreate have significantly developed, the majority still use Wacom tablets (like Intuos). Some contributors were quite creative in the list of gear and marked tools like “brain” and “ideas” so it’s good to know there’s at least 1% of them who think about the ideas before executing.

As for the subjects of their works, contributors mostly create backgrounds and business-oriented pictures, but also: 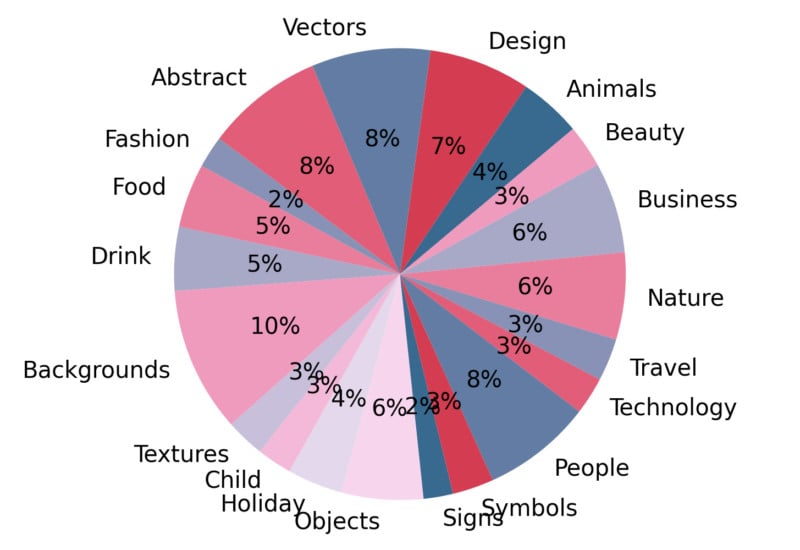 Shutterstock Authors: Why Do They Rank High?

Now when you have an idea who are the authors, let’s try to dig into where they rank and how did they achieve that ranking. First of all, we noted that there are 50,000 images but only 14,000 portfolios, which means they rank with multiple images. The average number of images they rank with is 3.5, but in reality, it is not uniform. There are accounts that rank many more times than others. 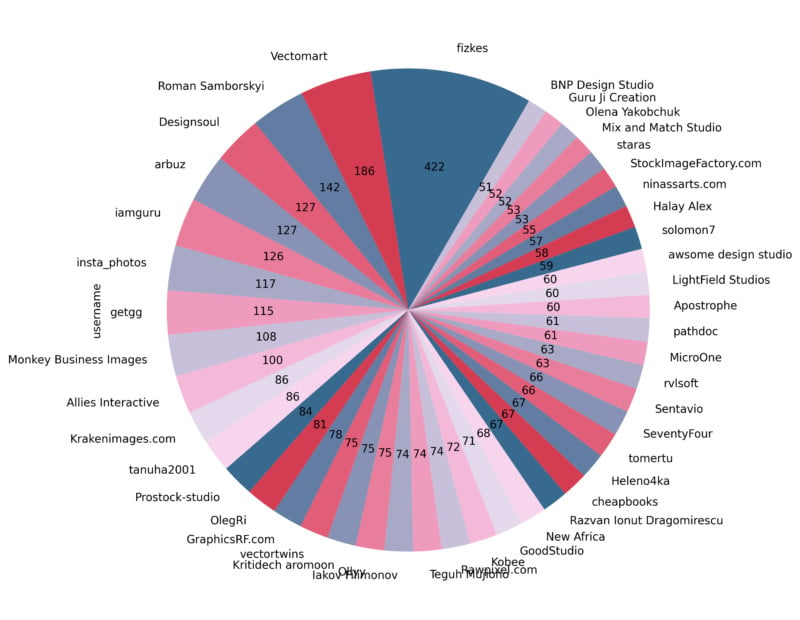 10 accounts rank more than a hundred times in top-500 queries. The notable exception is account fizkes, who ranks 422 times, which means on average they rank in 84% of top-500 queries! Here are all these accounts:

Traffic To Their Portfolios

There are multiple authors who manage to consistently get a lot of Google traffic to their portfolios. Arguably, this might help them to rank high in Shutterstock, too. It would be natural for Shutterstock to take Google search traffic into account because they rank in Google for a lot of queries as a first item either in organic or paid search results.

(Note: Traffic is an estimate of average organic search traffic per month generated by this page on Shutterstock. Calculated as estimated search volume of Search multiplied by the Click-through Rate (CTR) of the URL/website with search results)

A notable user account is “Designs Stock,” which has only 3,300 images in their portfolio but has as much traffic as account “wavebreakmedia” with 570,000 images. Also, the “betto rodrigues” account has the most traffic in the list of all 14,000 authors that we analyzed.

One of the most underutilized tactics a Shutterstock contributor can employ to earn more is self-promotion. There are multiple places where you can promote your portfolio: Facebook groups, niche forums, and Twitter accounts, just to name a few. Also, you can build links to your portfolio to help it rank high in Google so more customers will be able to find you through a simple search. But there are also few portfolios that took this very seriously, two of whom have almost a thousand unique websites linking to their portfolio.

It is actually possible to see who those 900 websites linking to top accounts on this list are. For example, let’s look at the first author by links: Andrey_Popov. We can use any of the free backlink checking tools and only a glance at the first few links gives us an answer. 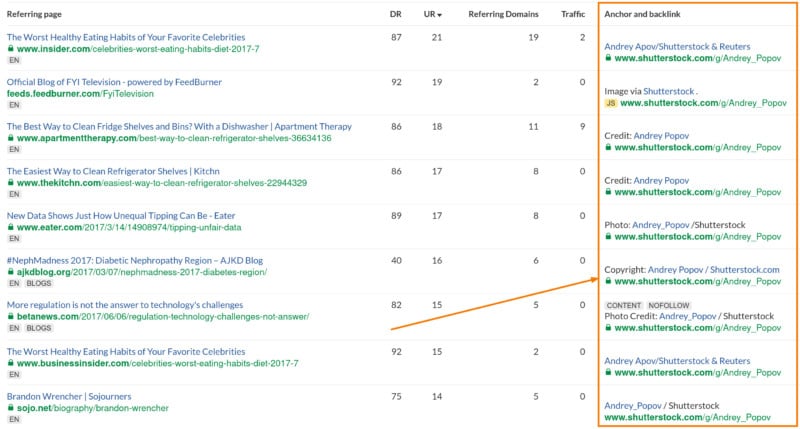 You can see what is the sources of the backlinks: it’s the image credits section! If you open any of the websites, you will see that the images they buy from Shutterstock have credits in the title and a link back to the account where they purchased them. So you have the magical self-reinforcing loop: the more images you sell, the more backlinks your portfolio gets from buyers, the higher your portfolio ranks in Google, the more search traffic you get, the higher your images rank in Shutterstock, the more images you sell. I would say this is one the most important aspects of self-promotion you can get.

If you evaluate what kind of content might produce more links, that would be editorial photos, frequently used in news. News outlets usually have high website rankings and lots of traffic that positively affects your portfolio, too. You may think about it when you plan what to shoot next.

How You Can Rank in Top-500 Customer Queries

So how can you join these elite authors? Obviously, one way would be to become an individual contributor (if you’re a studio), relocate to Ukraine or Thailand, start drawing Landscape Background illustrations using Adobe Illustrator, and get around 1,000 images in your portfolio. This way you would become one of the “typical” top-500 search results authors and it would increase your chances. Right?

Joking aside, we tried hard to show you that you don’t need to be a large studio with hundreds of thousands of images to rank at the top of the most profitable queries. You can be successful even with a few hundred of pictures and rank highly. But to get there, you need to find untapped content ideas, create content that is better than your competitors, cover a specific niche where there’s less competition, and slowly grow your presence. A data-driven approach can reveal a lot in today’s oversaturated Shutterstock market and, hopefully, you can learn from this and be more successful as a contributor.

The opinions expressed in this article are solely those of the author.

About the author: Taras Kushnir is the founder of the Xpiks app and the Stock Photo Ideas newsletter. He’s also been a microstock contributor since 2004 and an industry veteran. When he’s not working on Xpiks, he does data-driven analysis of profitable niches without much competition in top microstocks for Stock Photo Ideas.