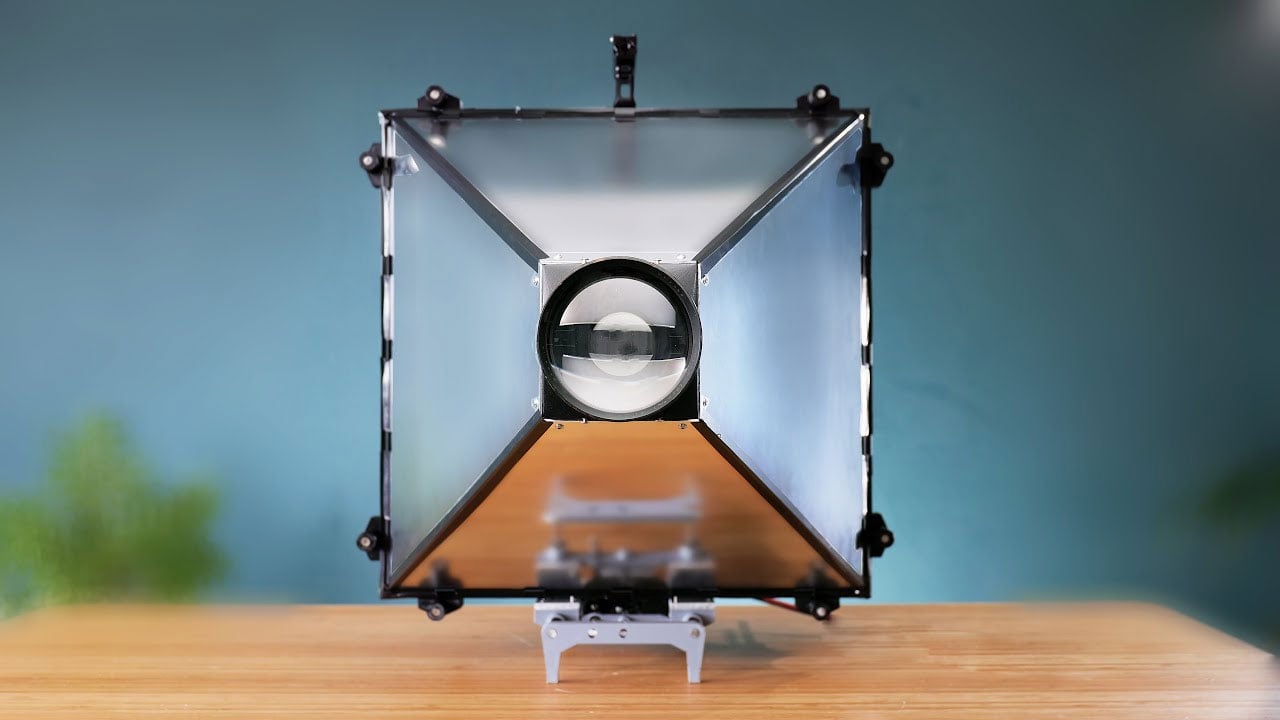 You can’t beat a good DIY crazy camera and they don’t get much crazier than this. Built by Matt at DIY Perks, this particular camera features a 432mm f/5 episcope lens with an image projection circle of around 500mm in diameter. To give you some idea of scale, your average full-frame lens has an image projection circle with a diameter of at least 43mm. That’s an area of 0.015 square meters. This lens has an image circle of 0.785 square metres (~50x the size).

And with this huge projection also comes a big advantage when it comes to depth of field. Despite being a 432mm f/5 lens, it offers the equivalent field of view and depth of field as a 35mm lens would on a full-frame camera if it had a maximum aperture of f/0.4. The closest lens to this designed for the relatively small full-frame format is the Zeiss 50mm f/0.7, and the last one of those to sell was rumoured to fetch around $200,000.

The lens itself comes from an Episcope, which Matt demonstrates in the video. It was essentially a tool that allowed the projection of real-life objects. Sory of a camera obscura in reverse. Instead of focusing the view from outside onto the interior surface like a camera obscura, this focuses the view from the inside of the camera out to the outside world, letting you project onto whatever surface you want. This is why it has such a huge projection circle.

Naturally, a lens with a projection circle this large isn’t going to be able to project straight onto a DSLR or mirrorless sensor. Well, it could, but you’d be seeing a teeny tiny crop from the centre that’s no different to shooting any 432mm focal length lens on the same camera. To capture the entire projection, Matt used a trick that was often used in 35mm lens adapters (like those from Letus) when shooting to small sensor video cameras. The lens projects onto a surface and then the camera films that surface. This way, you still get that huge frame look on a teeny tiny sensor. Matt really drives this point home by using his contraption with a smartphone.

Matt builds quite the contraption in order to mount the lens, the screen and the camera, along with Fresnel lenses to overcome some vignetting issues. But if you want to make one of these yourself (assuming you can find one of these lenses), Matt will have a download pack available soon with all of the plans to give it a go yourself.

It looks like it’d be a lot of fun to use, especially for big wide location portraits, even if it’s not exactly the easiest thing to cart around!