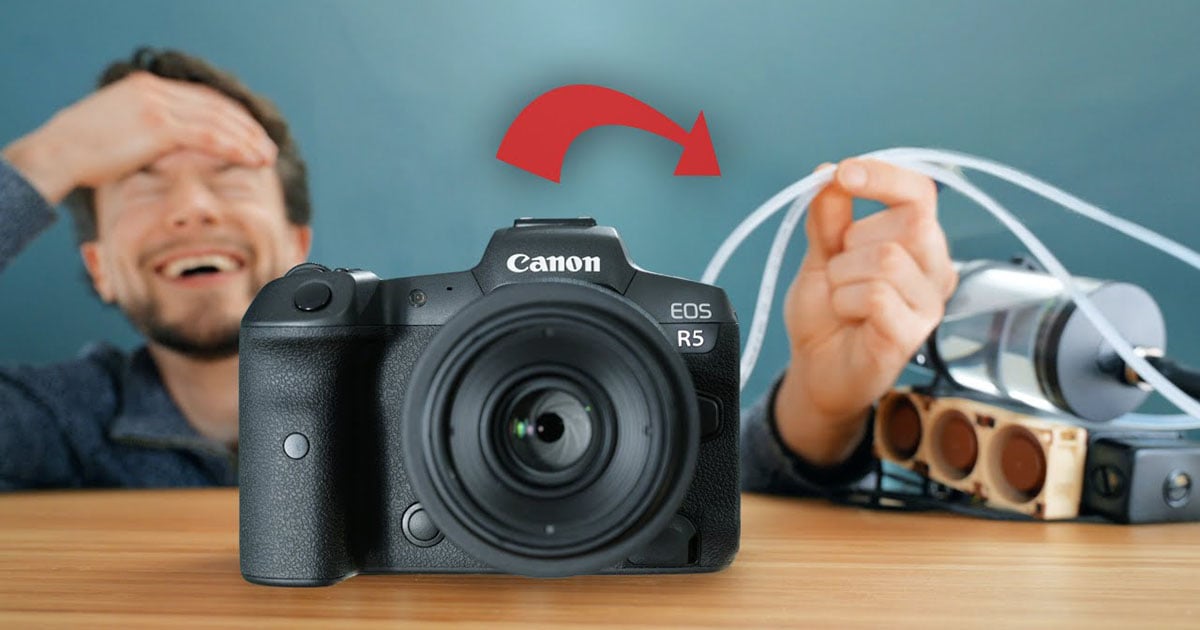 The Canon R5’s overheating time limit has been the subject of much discussion and controversy. Regardless of how or why the overheating happens, Matthew Perks over at DIY Perks has come up with an unusual mod that actually works to fix it: he watercooled his camera.

Using water to remove heat is common in everything from high-end computers to car internals, but it’s not something you hear about when it comes to consumer or professional cameras.

The Canon R5 can shoot around 20 minutes of 8K video cumulatively before it overheats and needs up to 2 hours to cool down enough to record another 20 minutes. While this limit may not affect casual users, it can be a deal-breaker for more professional uses.

After using a thermal camera and noticing a hotspot appearing on the back of his camera during video recording, Matt opened up the R5 and examined the rear internals. He found that the camera’s main processor is the culprit that generates a great deal of heat during recording and that the thermal pads covering the processor don’t seem to be positioned very well.

Since the processor is positioned under a power board and the camera’s back panel, Matt decided to use a thin strip of copper to pull heat away from the processor, out of the camera, and to a watercooling system. It’s not exactly portable or beautiful, but it’s functional.

When he tested the camera, though, it still shut down after 20 minutes with the overheating warning despite the processor not being too hot at all.

This experiment seems to confirm that the overheating time limit is based on a timer rather than a thermal sensor, which is something that has been widely discussed on the Web after it was found that resetting the timer could prolong the camera’s recording time.

Canon responded to the controversy by pushing out a firmware update that changes how the R5 monitors internal temperatures.

Matt had been running the old firmware in his first test, and after updating his firmware from v1.0.0 to v1.1.1, his R5 suddenly seemingly had no recording time limit — Matt recorded for over 4 hours without any kind of warning and without the temperature getting out of hand.

Without the watercooling, the camera could only record for 6 additional minutes (25 vs 19) using the newer firmware.

Having confirmed that proper cooling can make all the difference, Matt set out to find a more compact solution for extending his camera’s recording times. By creating a custom internal copper heat plate, a custom rear-mounted heat sink, and a custom external base-mounted fan, Matt was still able to cool the camera down the same amount.

“We’re left with a camera that not only has much improved 8K video record times but one that can be paired with some simple homemade attachments that allow it to reliably record in this mode for an unlimited length of time, making it a truly unique video creation tool,” Matt says.

Matt also believes that Canon could have designed the camera to dump the heat toward the bottom of the camera and then sold a separate base attachment for videographers that provides vastly extended recording times.

Watch the video above to see how Matt’s mods were done. You can find more of Matt’s videos on his ultra-popular YouTube channel, DIY Perks.

Thanks to Eros Peterson for sending in this tip.