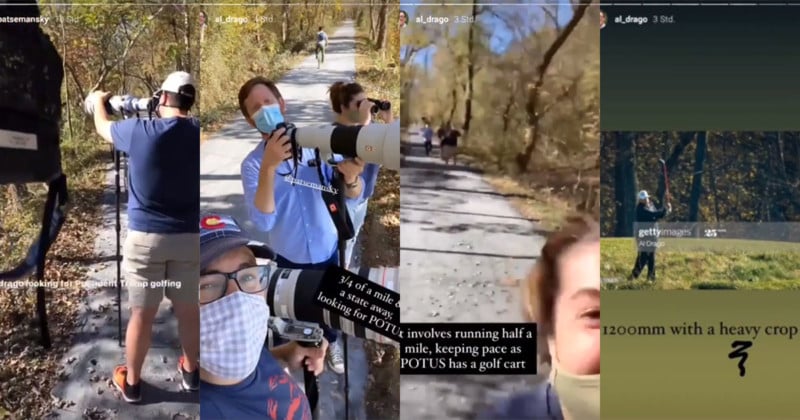 President Trump was golfing on Saturday when most mainstream media outlets called the 2020 presidential election, projecting former Vice President Joe Biden as the winner. A few photojournalists managed to capture photos of Trump by shooting with ultra-telephoto camera lenses from nearly a mile away across the Potomac River.

Photojournalist Al Drago shared an interesting behind-the-scenes view of how he, AP photographer Pat Semansky, and Washington Post staff photographer Jabin Botsford ran along a riverfront footpath to get the shots they were after.

Amazing to see how US photojournalists @al_drago and Pat Semansky got the shot of @realDonaldTrump golfing while the election was called for @JoeBiden.

So much effort! Great job! pic.twitter.com/1VwfwRujaz

The Washington Post reports that photographing Trump at the private 800-acre Trump National Golf Club in Sterling, Virginia, is tricky because photojournalists aren’t allowed on the course itself.

“[T]he best vantage point across state lines on the shore of the Potomac River is often blocked by trees,” the Post writes. “The photographers on foot have to run along the river to keep pace with Trump as he moves from hole to hole aboard his golf cart.”

After hearing the news that media outlets had called the race for Biden, the photojournalists frantically worked to shoot the breaking news photographs of Trump at that moment from their position in Maryland.

“We were shocked that it was in that exact moment that we’re basically looking at him as we’re finding out historic news,” Drago tells the Post.

The photographers spent over an hour trying to chase down the perfect shot.

President Donald Trump tees off as he golfs at Trump National Golf Club, on Saturday, shortly after the presidential race was called for Joe Biden.#Election2020 #trump pic.twitter.com/wyVRRSHYQU

In the end, the effort paid off — while the results were cropped and blurry, the photographers managed to capture a piece of history.